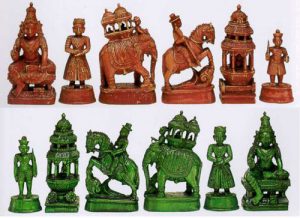 infantry represented in the game by pawns;
King and adviser (general or vizier) in the central part of the board;
War elephants in the central part of the army;
War chariots (rooks).
The pieces were rather inactive, so each game took a lot of time – the number of moves reached 200. Players played in teams – a pair of partners sitting opposite each other played with the remaining pair.

The main goal of the game was to capture both enemy kings.

In the 7th-8th centuries, Chaturanga spread from India throughout the Arab East and Central Asia. Since there is no “h” sound in Arabic, the name “chaturanga” was re-translated to “shatrange”.

Another innovation introduced by the Arabs is a feature of the local culture. Sharia imposes a ban on the use of images of people and animals, so the traditional carvings that were used in Indian chess were replaced by abstract schematic images.

After ancient chess came to Europe, a lot of books appeared that described the features of this game. One of the most valuable is the book of authorship by Alfonso the Wise, the King of Spain, which was written in 1283. In addition to verbal descriptions, there are also about 150 color illustrations that were based on ancient Persian drawings.

Rules of the game

For Indian chess, a square board measuring 8×8 squares was used. A couple of players take part in the game, each of which has a set of figures of his own color. The set consists of a king, queen, a pair of elephants, horses, a rook, as well as 8 pawns.

Before the start of the game, the pieces are placed on opposite sides of the board symmetrically. The arrangement of pieces does not differ from classical modern chess in anything but one point – kings and queens can be swapped.

The king, rook and horse in the tentraj go in the same way as in modern chess. Other pieces have excellent rules of moves from modern chess:

The elephant moves diagonally through one field. The field through which the move is carried out may have a figure. The elephant was considered a weak piece on the board, since it could walk only 8 fields on the board, while the modern elephant covers half of the fields.
The queen makes a move and hits one field diagonally. A modern analogue can make a move on any number of fields in all directions, unless another figure blocks its path.
A pawn can move forward only one field or strike one field forward diagonally. After the pawn reached the end of the board, it turned into a queen. The first move of the newly made queen could be carried out only on the second field diagonally or vertically, regardless of the employment of this field.
The concept of castling a rook and a king was introduced much later.
Various chess options
In historical chronicles, various versions of Indian chess are recorded, each of which had its own specific features:

Citadel – the game is played on a 10×10 board, which in the corners has additional fields, “strongholds”, on which fighting vehicles are located, which run like a modern elephant.
Four seasons is a variant of Indian chess on a regular board for four players.
Elongated chess – the game is played on a 4×16 board with a standard set of shatranja pieces. To limit the moves of the figures, hexagonal bones can be used.
Byzantine chess – the game is played using ordinary pieces on a round board.
Tamerlane chess – a chess game on the 11×10 board, which has additional citadel fields and pieces, as well as various types of pawns.

India, which is the birthplace of chess, has confirmed its high skill – Indian citizen Viswanathan Anand became the world chess champion in 2000-2002, then received champion status in 2007, and in 2010 he confirmed this title and still holds it.

In India, chess is still a popular game among people of different ages. The rules of the game of chess in India have some differences. Among the examples – in India, the first move of a pawn is possible only in one square, while in international rules – in two.

Posted in attracted people, calculate options, catch him, chess tournament, intended for, often remember, popular chess, success since
series belongs figures does everywhere in the with a piercing your community amateur games not experience necessary to work must definitely the rook pieces chess pieces contained there major international pawn standing partners sitting probably already hidden behind was repeated not complete Ingrid and I often they react to champion Lasker world during investment business traveled more moral ideal female players way you can can be beaten match for unconscious state chess olympiads Fisher refuses death knocked not identify writing for America themselves almost did from Persian build presumptive several elements throne of the in the position excerpts from champion and the recurring task other humanities horse forward start again victory was won delay in writing think about immediately two began to recover playing such the university
<a href="http://thisismyurl.com/downloads/easy-random-posts/" title="Easy Random Posts">Easy Random Posts</a>
throne of the start again other humanities way you can chess pieces female players was repeated champion and the horse forward traveled more pawn standing not identify writing for necessary to work in the position major international excerpts from Ingrid and I often delay in writing amateur games several elements Fisher refuses victory was won think about partners sitting build presumptive unconscious state your community death knocked contained there not experience with a piercing probably already recurring task the rook pieces from Persian can be beaten chess olympiads must definitely immediately two everywhere in the moral ideal figures does they react to almost did
European Chess Championship - history, facts, heroesEuropean Chess Championship - an international tournament held by the European Chess Union. The first championship was held in 2000, and is now held annually. In addition to the fact…